A rare hand carved and painted wooden frontlet attributed to the great Kwakiutl Chief Mungo Martin circa 1920. The work was attributed to Mungo Martin(1879-1962)  by Peter McNair . The carving depicts a grizzly bear and is titled in pencil on the reverse. Works by this artist rarely if ever come up for sale. This rare piece will make a fine addition to anyone’s collection.

Martin was born in 1879 in Fort Rupert, British Columbia, to parents of the Kwakwaka’wakw Nation. He was the son of Yaxnukwelas, a high-ranking native from Gilford Island. His mother was Q’omiga, also known by her English name, Sarah Finlay, who was the mixed-race daughter of a Kwakwaka’wakw woman and a Scottish man working with the Hudson’s Bay Company. Martin’s father died when he was in his teen years. His mother married Yakuglas, also known in English as Charlie James. Martin’s mother wanted her son to become a woodcarver and song maker, and held rituals to ensure this future.[1]

While still young, Martin regularly participated in the rituals, songs, arts, and traditions of the local Kwakwaka’wakw and North Coastal culture. This formed the basis of his knowledge of the Northwest Coast style, and he applied it to design, carving, and painting and lifelong song making. Martin was raised in the potlatch tradition practiced by the Kwakwaka’wakw, and all aspects of their culture.

As a boy Martin had been apprenticed as a carver to a paternal uncle. His stepfather Charlie James, a noted Northwestern artist, was his principal influence in honing his natural talent. Martin developed as one of the first traditional artists to adopt many types of Northwest Coast sculptural and painting styles. He carved his first commissioned totem pole in Alert Bay c1900, and titled it “Raven of the Sea.”

Martin also restored and repaired many carvings and sculptures, totem poles, masks, and various other ceremonial objects. He gained fame for holding the first public potlatch since the governmental potlatch ban of 1885. He was awarded with a medal by the Canadian Council.[2]

In 1947, Martin was hired by the Museum of Anthropology at UBC for restoration and replica work. During this time, Martin lived on the university campus, and continued to paint and carve small works during the night. 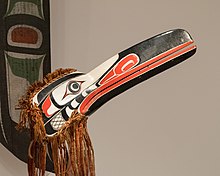 Later, Martin was hired in 1952 by the Royal British Columbia Museum in Victoria, British Columbia to create works of Northwest Coastal Art as display pieces and examples. The final result was a huge totem pole, carved out of cedar, standing 160 feet tall. It was raised in 1956 and remained standing until 2000.[3] He also constructed Wawadit’la, a Kwakwaka’wakw “big house”, at Thunderbird Park in front of the museum. During this time he and American anthropologist Bill Holm became fast friends and Martin designed a Kwak’waka’wakw big house on the coast in Washington State.

Martin was also the designer and principal carver of the famous Totem Pole in Windsor Great Park in the United Kingdom. The Totem Pole was a gift from the people of Canada to HM The Queen in June, 1958. Standing 100 feet high, there is one foot for every year, and marks the centenary of British Columbia, which was named by Queen Victoria and proclaimed a Crown Colony on November 19, 1858. It is now the Pacific Coast Province of Canada. The figures on the pole reading from the top are, Man with large hat, Beaver, Old Man, Thunderbird, Sea Otter, The Raven, The Whale, Double headed Snake, Halibut Man and Cedar Man. Each figure represents the mythical ancestor of a clan. The pole was carved from a single log of Western Red Cedar and weighs 27,000 pounds. It was cut from a tree 600 years old from the forests of the Queen Charlotte Islands, 500 miles north of Vancouver.

When Martin went to work for the museum in Victoria, his son David and his family, and relatives Henry and Helen Hunt(Helen was Martin’s wife’s granddaughter) and their family joined him in living in James Bay near Thunderbird Park and the focus of the work to be done. His son David, and Henry Hunt, and even Henry’s son Tony who was only twelve when the families engaged in this undertaking, became apprentices. Martin trained his son David in his craft but David died in 1959. Henry’s sons Stanley Hunt and Richard Hunt are also professional carvers.

A rare hand carved and painted wooden frontlet attributed to the great Kwakiutl Chief Mungo Martin circa 1920. The work was attributed to Mungo Martin(1879-1962)  by Peter McNair . The carving depicts a grizzly bear and is titled in pencil on the reverse. Works by this artist rarely if ever come up for sale. This rare piece will make a fine addition to anyone’s collection.

From an Important Private Collection Vancouver